Kōyō, the season when summer’s blanket of green foliage gives way to an autumn tapestry of bright reds and glowing yellows. What transformations take place within each leaf to achieve this rich brocade of autumn colour?

The green pigment that gives leaves their colour is chlorophyll, which is used for photosynthesis, the process by which plants convert the energy from light into fuel. Chlorophyll is essential for plants to live and is found in the leaves of all plants apart from a number of parasitic plants that get their energy from other organisms.

In addition to chlorophyll, a number of proteins are involved in photosynthesis, as well as yellow pigments called carotenoids. Together with chlorophyll, carotenoids are always present in healthy leaves, but are often masked by high levels of chlorophyll, and are not usually visible. 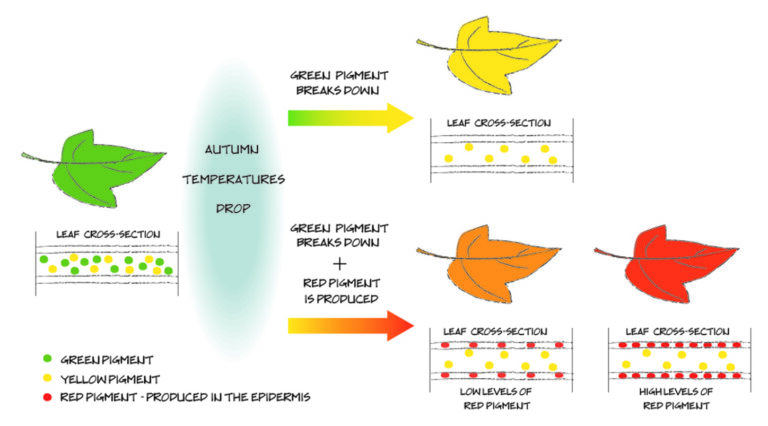 What happens when leaves change from green to yellow?

The leaves of deciduous trees work hard all summer performing the manufacturing processes vital to the life of the tree. However, when autumn comes and temperatures start to drop, these hard-working green leaves down tools and begin their shut-down process. As this occurs, trees prepare to shed their leaves and head into winter dormancy.

The leaves of trees such as ginkgo, katsura and poplars turn a bright yellow in autumn. The gingko leaf in the illustration above shows the leaf partway through its transformation from green to yellow. The chlorophyll has begun to break down starting from the leaf margins, but some green remains around the stem. This green will also soon disappear, leaving the leaf completely yellow. When you notice from a distance that a ginkgo tree in early autumn appears to have a mixture of green and yellow leaves, take a closer look. You’ll see that the leaves are in this process of transformation.

What happens when leaves turn red?

For leaves to change to red in autumn, not only does the chlorophyll have to break down, but a red pigment also has to be produced. This red pigment, an anthocyanin, is only produced by cells in the epidermis (skin) of the leaf. Although these cells in the outer layer of the leaf do contain small amounts of chlorophyll, the break-down of chlorophyll and the production of anthocyanins are separate processes and not all trees produce this pigment.

As the green chlorophyll breaks down and the red anthocyanin pigments are formed in the outer layers of the leaf, the leaf begins to turn red. Japanese maples are well known for their brilliant autumn reds, as are Boston ivy, rowans and sumac.

Adding to the variety of the autumn spectacle, colours differ even within the same species of tree, depending on how atmospheric temperatures behave. Maples, liquidambars and flowering cherries, often used as ornamental street trees in Japan, frequently display a great deal of variation within the colours of their leaves and it is this variation in colour that makes the autumn display all the more attractive.

Incidentally, although a number of theories have been put forward, nobody is entirely certain why the leaves of some species produce anthocyanins just before they drop. There is no need to attract bees for pollination as there is with flowers, and they certainly don’t do it just for our enjoyment! Some aspects of the secret life of trees remain one of life’s little mysteries.

Do evergreen trees have autumn colours?

Because of the intensity of the autumn display, we tend to think of this colour change as being something only deciduous trees do. However, the leaves of evergreen trees also change colour and drop off. Yes, evergreens are covered in green leaves all year round, but each one of those leaves does not live forever. They can last as little as one year and as much as several years, but they do all eventually die and fall off – just not all at the same time. When that happens and the chlorophyll breaks down, the leaves of some species produce anthocyanins and do indeed turn red.

The Japanese ternstroemia, a popular garden tree, sometimes has red leaves standing out like the belle of the ball amongst the more sombre deep green leaves. The woodland elaeocarpus, common in western Japan, almost always has red leaves sitting amongst the green. In fact, this is one of the distinguishing characteristics of the species. Leaf fall is not the only time that leaves turn red. The new leaf shoots of some trees are red. One Japanese species that has red young leaf shoots is Mallotus japonicus, giving it its Japanese name, akamegashiwa, which translates as ‘red budded oak’.

Photinia x fraseri ‘Red Robin’, another popular garden shrub, also has bright red new leaves. This could be because the chlorophyll is late to develop, whereas the leaves produce plenty of anthocyanin. Interestingly, the new leaf shoots of some trees species are almost black, suggesting that both chlorophyll and anthocyanin are present in concentrated amounts.

The varied changes of seasonal colouration occur according to the pattern by which the green, yellow and red pigments in leaves form and break down.